The Salivary Nicotine AUTOTEST is a test that detects the presence of cotinine and nicotine in a saliva sample. The test can be positive up to 4 days after the last cigarette.     Unit box.

Nicotine, an alkaloid naturally present in the tobacco leaf, is a powerful psychostimulant substance responsible for the phenomena of tobacco addiction.

PRINCIPLE OF THE SALIVARY NICOTINE SELF-TEST

The MEDISUR salivary nicotine self-test is a speciﬁc immunochromatographic test that detects the presence of cotinine (primary metabolite of nicotine) in a saliva sample. It has a cotinine detection threshold of 20 ng/mL. The test can be positive up to 4 days after the last cigarette.

PURPOSE OF THE SALIVARY NICOTINE SELF-TEST

The purpose of this test is to detect the presence of cotinine (primary metabolite of nicotine). The threshold of 20 ng/mL generally makes it possible to separate passive and active smoking. On the other hand, due to the inter-individual variability and the assimilated quantity, a highly exposed passive smoker may present a positive test and conversely, a very occasional smoker may present a negative test.

WHO TO RECOMMEND THE SALIVARY NICOTINE SELF-TEST TO

Do not eat, smoke or drink for 10 minutes before taking the test.

The box contains the necessary equipment for a test:

Only open the foil pouch when using the test.

The anti-moisture bag should not be used.

The test is positive when a band appears in the reading window next to the C marker (control) and no band appears at the T marker. This means that the saliva contains a cotinine concentration which is above the detection threshold.

The test is negative when a band appears in the reading window next to the C mark (control) and a band appears at the T mark. This means that the saliva does not contain cotinine or contains a concentration of it. below the detection threshold. The intensity of the T line can vary depending on the cotinine concentration. Regardless of the intensity, the test will be negative.

The test is invalid when the control band (mark C) does not appear. Most often, this occurs when the patient does not follow the directions in the package insert. Read the instructions carefully and start over with a new screening test. 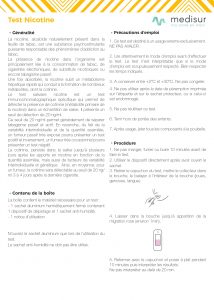 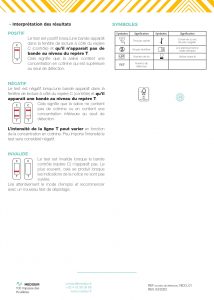 Be the first to review “AUTOTEST Nicotine salivaire” Cancel reply