The urinary cannabis self-test is an effective, simple and quick test to use. It detects the presence of Cannabis in the body through a urine sample. The test can detect THC over a period of 30 minutes to 7 days after consumption.           Box of 2 tests.

BIOLOGY OF THE URINARY CANNABIS SELF-TEST

Cannabis is hallucinogenic and alters your sensory perception sensory perception, motor coordination and memory. Any kind of action requiring concentration is a risk, such as driving. Studies have shown that drivers who have used cannabis in the last 3 hours have a higher risk of an accident. The MEDISUR THC urine test detects cannabis in 5 minutes. This allows you to control yourself before driving or to adapt your consumption behavior. When a person has smoked, all of the chemicals will be eliminated in the urine. This is what the test will detect. This THC urine test is suitable for occasional and regular smokers. The first are detected from 2-5 days. The others can extend over several weeks (up to 10 weeks). Detecting cannabis use for weeks is the main advantage of the urine test.

The urinary cannabis self-test can detect cannabis from 30 minutes after consumption and over a long period of 2 to 7 days for occasional use, or even longer for regular users. The test is based on the use of antibodies speciﬁc for THC and its derivatives. The test is able to detect in the urine a concentration of 50µg/L above which the result is positive.

PURPOSE OF THE URINARY CANNABIS SELF-TEST

The objective of this test is to detect cannabis consumption dating from 30 min to 7 days. It is not a tool allowing the user to avoid police checks. The consumption of cannabis, unlike alcohol, being prohibited in France, the tests of the gendarmerie detect "the slightest trace". The driver exposes himself to heavy penal sanctions.

WHO TO RECOMMEND THE MEDISUR URINARY CANNABIS SELF-TEST TO

The test can be performed at any time of the day. Attention, for a regular consumer, it is advisable to wait at least 24 hours after the last consumption to drive and that the saliva test of the gendarmerie is negative.

Do not open the desiccant

Reading the result after 5 minutes:

The test is positive when a band appears next to next to C (Control) and not next to T (Test). This means that the urine contains cannabis at a level higher than the legal threshold. You should not perform actions requiring attention or concentration, such as driving.

The test is negative when a band appears next to C (Control) and also next to T (Test). This implies that the urine does not contain cannabis or at least below the legal threshold (50ng/l). The intensity of the T band can be lighter than C. This will not change the result.

The test is invalid when there is no strip next to C (Control). This often happens when the patient does not fully follow the instructions. Read the instructions and do another test. 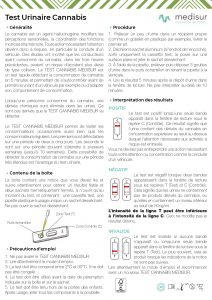 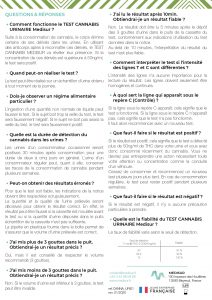 Be the first to review “AUTOTEST Cannabis urinaire” Cancel reply