The salivary Multi-Drug AUTOTEST is an all-in-one tool that is simple and quick to use to screen for 4 drugs simultaneously: Cannabis, Opiates, Amphetamines, Cocaine, in less than 10 minutes.     Unit box.

This saliva test detects the recent consumption of several drugs: cannabis (THC), opiates, amphetamines and cocaine. Δ9-THC is the main psychoactive component of cannabis. After consumption, it appears in this form in the saliva. Cannabis consumption can lead to disorders of the central nervous system, by altering sensory perception, coordination and memory. Opiates are used as analgesics in medicine and also as narcotics for their euphoric action.

The side effects are numerous: nausea, vomiting, disruption of the sleep cycle. Amphetamines are psychostimulants, they are used illegally in festive, professional or sporting environments to reduce feelings of pain, fatigue and hunger, prolong wakefulness and physical endurance. Side effects include depressive, anxious, confusional symptoms, sleep disturbances, cardiovascular disorders. Cocaine is a powerful central nervous system stimulant. Extracted from coca leaves, cocaine is originally a painkiller. In the short term, cocaine has a brief and intense high followed by a deep depression. In the long term, cocaine damages the heart, kidneys, brain and lungs.

After alcohol and tobacco, cannabis is the most used psychoactive substance in France with 5 million users per year, the fourth is cocaine with 600,000 users per year.  The use of amphetamines is more widespread in the party environment, and in 2017 concerned 2.3 % among 17-year-olds during their lifetime. In 2017, 24,400 people were hospitalized (including in psychiatric hospitals and in follow-up and rehabilitation care) with an associated or related main diagnosis of behavioral disorders related to the use of opiates. 8 % of road safety offenses are due to the consumption of narcotics.

The multi-drug test makes it possible to detect recent consumption of 4 classes of drugs in the saliva: cannabis (THC), opiates, amphetamines and cocaine. Each number in the reading windows indicates a class of substance. Find the correspondence and the detection threshold below:

PURPOSE OF THE SALIVARY MULTI-DRUG SELF-TEST

The purpose of the test is to get an indication of recent use of different drugs. The detection times of the multi-drug test depend on several factors including the dose. On average, cannabis is detectable for up to 12 hours in an occasional consumer and up to 24 hours in a regular consumer. The other drugs are detectable for about 24-48 hours.  The multi-drug test is not a tool allowing the user to avoid police checks. The consumption of drugs, unlike alcohol, being prohibited in France, the tests of the gendarmerie detect "the slightest trace". The driver would face heavy criminal penalties.

TO WHOM TO RECOMMEND THE CARSALIVARY MULTI-DRUG TEST

To the consumer who wishes to self-evaluate in order to become aware of the persistence over time of drugs in his body and therefore of the risks he would take to drive or work in a high-risk position.

To his entourage in order to assess the reality of drug use and to initiate a dialogue on prevention.

The box contains the necessary equipment for a test:

Reading of the result after 6-7 minutes the start of the migration.

Do not interpret beyond 15 minutes. 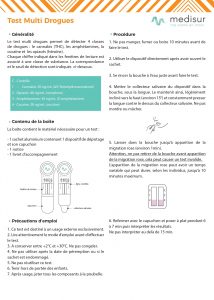 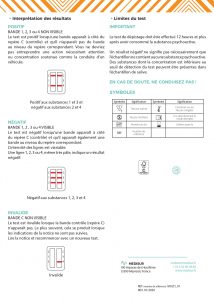