The MEDISUR cannabis saliva self-test is an innovative screening test that is simple and quick to use. It detects THC, the active substance in cannabis, in saliva. The test can detect cannabis consumption over a short period of a few hours (6 to 8 hours) depending on the dose.     Unit box.

BIOLOGY OF THE SALIVARY CANNABIS SELF-TEST

∆9-THC is the main psychoactive component of cannabis. After consumption, it is found in this form in the saliva. Cannabis consumption can lead to disorders of the central nervous system, by altering sensory perceptions, coordination and memory. Consumers also describe other symptoms such as paranoia, anxiety, depression, confusion, hallucinations and increased heart rate. These diﬀerent effects have a negative influence on the ability to drive a vehicle.

PRINCIPLE OF THE CANNABIS SALIVARY SELF-TEST

The MEDISUR cannabis saliva self-test can detect cannabis consumption over a short period of a few hours (on average up to 6 to 8 hours for an occasional user), depending on the dose.

In the leaflet, it is explained that for an occasional consumer, that is to say, who consumes cannabis less than twice a week, it can be estimated that a saliva screening, carried out with a device authorized for the screening tests planned to Articles R. 235-3 and R. 235-4 of the Highway Code (saliva tests used by the National Gendarmerie and the National Police; detection threshold: 15 ng/mL), will be positive at least until the 12th hour according to the last consumption. It is therefore recommended to wait at least 12 hours after the last consumption to do the saliva cannabis test, if it is negative then in the majority of cases, the saliva test done by the gendarmerie would be negative.

PURPOSE OF THE CANNABIS SALIVARY SELF-TEST

The objective of this test is to detect recent cannabis consumption, a window when the consumer is still under the effect of the drug. It allows to become aware, after the use of cannabis, of the presence of THC in the body.

This is a self-assessment tool for post-consumer physical condition. It is a test at the service of the consumer and his entourage to help dialogue and support. It includes an educational sheet with a questionnaire based on the CAST method to measure your level of addiction.

It is not a tool allowing the user to avoid police checks. The consumption of cannabis, unlike alcohol, being prohibited in France, the tests of the gendarmerie detect "the slightest trace". The driver will face heavy criminal penalties.

WHO TO RECOMMEND THE CANNABIS SALIVARY SELF-TEST TO

Consumers who wish to self-assess in order to become aware of the persistence over time of THC in saliva and therefore of the risks they would take driving or working in a high-risk position.

To his entourage in order to assess the reality of cannabis consumption and to initiate a dialogue on prevention.

This test is intended for external use only.

Read the instruction manual carefully before performing the test.

Do not use after the expiry date or if the sachet is damaged.

Do not reuse the test.

Keep out of reach of children.

After use, dispose of all components in the trash.

The box contains the necessary equipment for a test:
– 1 aluminum bag containing 1 screening device and its cap
– 1 notice and 1 accompanying booklet
Only open the foil pouch when using the test. Do not use the desiccant sachet.

Reading of the result after 10 minutes.

The test is positive for cannabis when a band appears next to the C(Control) mark and no band appears at the THC mark. You should not engage in any action requiring sustained attention or concentration such as driving a vehicle.

The test is negative for cannabis when a band appears next to the C mark (control) and a band also appears at the THC mark. The intensity of the lines is variable. A THC line, even very faint, indicates a negative result. 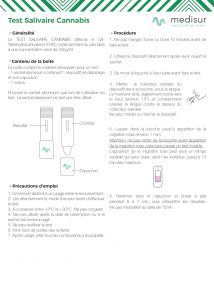 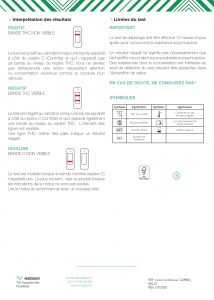 Be the first to review “AUTOTEST Cannabis salivaire” Cancel reply